The November sun shone down on the Sevigny Chateau, causing the leaded windows to sparkle. The autumn flowers with their orange, red, yellow, and russet petals brightened the entrance way. But the group of people who trudged through the front door were not sparkling or bright. The long awaited and dreaded cooking contest had taken place. Vanessa's sweat soaked chef's jacket attested to her hard work. She had even sewn stars on it for luck. Alas, it had been in vain. She had not won. Only Charlie was scampering and smiling as everyone went off to sulk. He still looked up at her with adoring eyes. 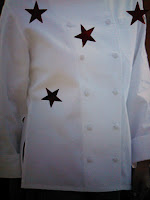 Sylvia touched Vanessa's arm. “I think you'd rather be alone for a while. I'll just go to my room and return some of my urgent phone calls.” The friends separated at the top of the curving staircase. Charlie followed Vanessa to her room.

She threw herself on the embroidered silk coverlet, not bothering to carefully remove it first. When the disastrous results had been announced, in French of course, she saw from Jack's grim face she had not done well. No one criticized her. They just smiled weakly and Michelle said, “tu as fait de ton mieux.”

Lucy translated, “You did your best,” adding, “The family thanks you for that.”

Vanessa was too exhausted to cry. Her thoughts were a jumble. She had dropped everything, flown thousands of miles, spent hours trying to learn to cook with a demanding chef, had her dog stolen, her best friend had even come out for the cooking contest, and for what. For nothing. A big fat zero. She would make flight reservations home as soon as she could speak without sobbing. Hopefully, she wouldn't even see any family members again. Edmund would help her. Charlie snuggled up next to her as she fell into a restless sleep. The little dog licked her face, perhaps attracted to her salty tears. She dreamed a handsome prince in velvet robes, wearing a white chef's hat was kissing her face.

A light tapping on the door woke her. She called, “Come in.” It was Michelle and Lucy. She had told everyone she couldn't cook. It wasn't her fault if they wouldn't listen to her. They had no right to criticize her for not winning. But that was not why they were there.

Michelle reached over to smooth her hair away from her forehead. “Je suis désolé que vous aviez cette mauvaise expérience, so sorry.”

Lucy jumped in. “It's all our fault. Don't worry about the contest. That's not important.”

Vanessa was confused. Not important! All she'd heard for the last several weeks was how much she needed to practice to win the contest. And she had tried. She'd spent hours in the kitchen with fuss budget Jack trying to perfect her technique.

Michelle struggled with English to say, “It was a mad plan, crazy. I will let Lucy explain to you. Je suis trop embarrassés par toutes.” She shrugged her shoulders and left.

Vanessa was getting even more confused. She remembered Sylvia had raised the question of what was the real purpose of the contest. “Just what's going on here?” she demanded.

Lucy sat on the edge of the bed. “How do you feel about Jacques?”

“Jack? He's OK, I guess. A slave driver when it comes to cooking, but otherwise he seems like a nice guy...for a Frenchman.”

“Hmm, yes, we were afraid of that. You do not feel attracted to him?”

Vanessa sat up and swung her legs over the side of the bed. “Attracted to him? Just the opposite. His nit picking has driven me crazy.”

“Our plan backfired, as you Americans say. We had hoped that by spending time alone with him in the kitchen for days, the two of you would feel a mutual attraction.”

“Your family was trying to fix me up with him?” Vanessa couldn't believe what she was hearing. “There are easier ways to do that, you know.”

“Oui, but we wanted it to happen naturally, without you knowing.”

“So, the contest was just a trick, to keep me here?”

“Not a trick. We hoped you might do well, but we really hoped for a marriage.”

“A marriage?” Vanessa's blue eyes widened. “With Jack? Why?”

“Let me explain. We did need a non family member to enter the contest. As you saw today, even our neighbor, Ricard. did not actually participate in the contest. His family's lavender recipe was prepared by a stranger to our area.”

“OK, but you said you really hoped for a marriage. Where does that fit in?”

“As delightful as our family might be, you may have noticed there are no children running around. Michelle and Wilhelm did not have children and are past the age where that happens. I regret to say, I am on the cusp of menopause and not married, so it does not look like I will be producing another generation. So who is left? Jacques. And no, he is not gay. He has had many girl friends. But none that either he wanted to marry or that wanted to marry him. In most cases, we were glad of that. But inheritance laws in France are very strict, especially where land is involved. It is imperative that Jacques produces a legal heir. We know and love your mother and we knew a lot about you, so we hoped that the two of you would find a common bond.”

“But wait a minute. Michelle originally told me she needed my mother to do this, but my mother was in Thailand and couldn't do it. That doesn't make any sense. My mother's already married and I think past child-bearing age.”

Lucy hung her head. “Please do not be angry with your mother, but she was in on our little scheme. She, too, would like to see another generation around her.”

Vanessa squeaked, “My mother! My mother knew this plan and didn't warn me.” Then she remembered another strange request. A dressy, white dress. She'd been asked to bring a white dress. Was that to be her wedding gown? Vanessa was outraged. Even 'Dumpling Dan' had never made her so mad. And she wondered, what about Jack?
She hissed, “Was Jack in on this plan, too?”

“No, no. We wanted it to happen naturally, without either of you knowing.”

Vanessa couldn't believe that the Sevigny family, which she'd thought kind and welcoming, was filled with diabolical planners. No wonder some of them, especially Wilhelm, had been so strange acting. That he had forsaken his own family name to take theirs should have been a tip off that things were not what they seemed.

“Does Jack know now? Have you told him what all of you planned for him? Marriage to an incompetent American, who couldn't cook her way out of a frying pan.”

“Michelle is telling him now.”

“From what I know of him, you'll be lucky if he doesn't leave never to be seen again.”

“He is family. He will understand.”

“Well, I don't and I'm leaving as soon as I can.” Vanessa seethed. The door shook with a thunderous pounding. If it was another member of the Sevigny family she was ready to knock them over to escape.

Without waiting for an invitation, Jack walked in. He scowled at his sister and gestured towards the doorway. “Please allow us some privacy. Vanessa and I need to talk.”

Email ThisBlogThis!Share to TwitterShare to FacebookShare to Pinterest
Labels: aaChapter16