Eula May still couldn’t believe she was actually in China.  It seemed about as exotic as anyplace could be.  Crowds of people rushing through the streets speaking very fast and very loud in languages she couldn’t understand.  Duh, China had more than 290 living languages, although the official business language was Mandarin.  The only words she knew were “ni hao” or “hello” in English.

She especially loved the old, charming buildings faced with colorful, blue, red, yellow, and green tile and Pagoda style roofs.  Bending backwards to look up at the tippy top of the buildings she searched for demons flying through the air.  The guide, Jack, told her the upturned roof ends were to prevent evil spirits from landing and bedeviling the people working or living  in side.
It was a lot different from the little country town of Karnak, Kentucky, where she grew up.  And, of course about as far away as it could be, really on the other side of world.  As childhood friends, she and Wanda dug holes in their back yards not really believing they could dig to China, but it was fun pretending.
The only other time she remembered hearing about China as a little girl  had to do with food.  Or rather the lack of food.  She was a ‘picky’ eater and drove her Mother crazy by wanting to play instead of to sit forever at the green formica kitchen table trying to force down another bite.  Oh, if only that was still true she thought as she ran her hands over her slightly jiggly hips.
She had been worried about having to eat weird things in China, like eels and grasshoppers, but also had hoped that the anticipated strange food would help her lose weight.  That hadn’t happened.  Most of the food was very tasty, especially at the great hotel breakfast buffets.  She had never thought about adding chopped tomatoes and onions to scrambled eggs but they were delicious.
Back in her childhood she was encouraged to clean her plate with the warning, “Children starving in China would love to have this food.”  She never understood why her eating more would help those other kids.
She now knew that China, in the past, like a lot of other under developed countries had a problem with producing and distributing enough food to its people.  Fortunately, everyone she saw on this trip seemed to be in good health and not especially skinny.  Her mother would be glad to hear that Chinese children were no longer starving. 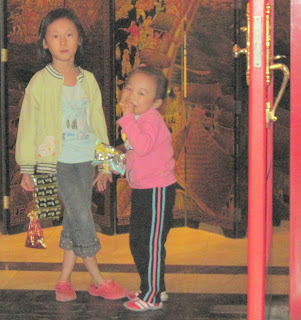 That first evening in Beijing there was a Welcome to China dinner at a large restaurant.  Eula May and her tour group were greeted at the moon shaped doorway by two young girls, probably the owner’s daughters, who smiled and shyly waved them in side.
After everyone was seated, the youngest little girl, named Mai Ling, about 4 years old, went around giving each diner a sweet smile and several dried pumpkin seeds to eat.  Eula May and the other tour members thought she was just as cute as a button and thanked her profusely.
There were at 10 at each round table with a large Lazy Susan in the center and a small plate at each setting.  Throughout the meal, dishes of incredible variety were added to the revolving server as empty ones were removed.  Each diner also had a small side dish divided to hold garnishes: pickled cucumbers, spicy diced peppers, sliced radishes, and sesame seeds.
Eula May didn’t know what to do with all these condiments so still had a lot left in her garnish plate when Mai Ling came around again, her shiny black bob bouncing with each step.  She was distributing more pumpkin seeds but also checking the contents of the little side dishes.  She pointed to Eula May’s remaining food, then to Eula May, and finally to her own mouth.  Mai Ling successfully used sign language to give Eula May a message.  Jack said, “She has heard about all the children starving in America, so is urging you to clean your plate.”  Everyone at the table laughed.
#

Email ThisBlogThis!Share to TwitterShare to FacebookShare to Pinterest
Labels: China, Eula May, humor